"How blessed is the man who does not walk in the counsel of the wicked, nor stand in the path of sinners, nor sit in the seat of scoffers! But his delight is in the law of the Lord, and in His law he meditates day and night."
-Psalm 1:1-2

Statements were made during a bible study I was in about how it would be dificult as David, the Psalmist, or any other writer of the Psalms to actually delight in the law of the Lord as written above. The reason being, there were so many specific laws that the Jews had to comply with back in their day. Ceremonial laws regarding what to sacrifice and when; civic laws regarding interaction with one another; and moral laws regarding motives behind doing things. They were extensive and deep. They covered the entire lifestyle one should have as a Jew. But David wrote that he delights in this; Paul wrote that the Law is holy, righteous and good (Romans 7:12). How, with something that seems so burdensome as the law, could it be seen in this way? Simply stated, the law that is given to us is given by the One, True God, that is why!

God, through the law, reveals to us His standard, a standard that He has for Himself and the standard that is right to keep if one is to ever come into His presence. The reason why Dvid was able to delight and why Paul saw the Law in the light that he did was because God has revealed Himself to us through His Law. But in this light, truth is revealed. This is where the burden of the Law, no matter how mundane or exciting, is exposed. What we see is that we are incapable of fulfilling the complete Law of God. In looking at the Law, and even delighting in it for the essence of what it is, we feel a burden on our backs. The burden, what truly ways us down, is not the Law itself, but rather the sin that has been made known through the Law. What was on the back of the Pilgrim in his journey was sin; the Law only allowed him to realize that he actually had a burden to carry. But this is the only role the Law plays in this world. The Law cannot save us for that was never its purpose. 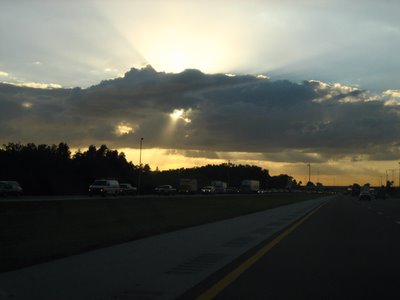 So because it is holy, righteous and good, we can see the Law as beautiful and are able to delight in it. The Law allows us to gaze upon the perfection of God, His standard for Himself, the joy He has in keeping His Law, and His purpose for giving it to us. Now the truth is we find great difficulty delighting in all of the Law, but if we are to delight in the Lord, we must realize that the Law is but a glimpse of who he is. To aparllel this I believe we must take a look at the New Testament example and truth of suffereing and rejoicing in it. We know Christ suffered for our sake, to the point of death on the cross, thus to be a Christian, to follow Christ, we must heed His words, "if anyone wishes to come after Me, he must deny himself, and take up his cross and follow Me" (Mark 8:34), and realize that we too will suffere for and in His name. but I don't know too many people who actually consider it a delight to suffer. As Christians, knowing there is complete joy and life in Christ, we also know that we are to rejoice and find joy in suffering for His name's sake, because then we are participating in the life of Christ. Peter wrote it like this:

"Beloved, do not be surprised at the fiery ordeal among you, which comes upon you for your testing, as though some strange thing were happening to you; but to the degree that you share the sufferings of Christ, keep on rejoicing, so that also at the revelation of His glory you may rejoice with exultation. If you are reviled for the name of Christ, you are blessed, because the Spirit of glory and of God rests on you...if anyone sufferes as a Christian, he is not be be ashamed but is to glorify God in this name." -1 Peter 4:12-14, 16

And Paul affirmed this in his letter to the Philippians:

"...not having a righteousness of my own derived from the Law, but that which is through faith in Christ, the righteousnes which comes from God on the basis of faith, that I may know Him and the power of His resurrection and the fellowship of His sufferings, being conformed to His death; in order that I may attain to the resurrection from the dead. -Philippians 3:9-11

These great men of God, pillars of the Christian faith, knew that we were not only to suffer as Christ suffered, but to rejoice in that because we are fellowshipping with our Savior and Lord for His name's sake! Although it is not "fun" to suffer, we find our joy and delight in that we are alive in Christ and participate in His life forever through our life and the present suffering we may experience.