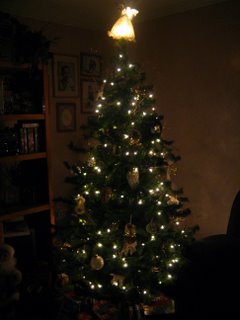 It seems like quite some time since I last updated my online journal. Life has not been short of anything, but crazy. But here is a reflection I have been wanting to write for quite some time:

Reality and faith. The pervading thought in today's society tells us that reality is dependent on faith; this is the essence of post modernism. Granted this is only thought, but many people try to argue the existence of objective truth based on the idea that each individual perspective is truth and reality is simply left to the mind of the creator of that reality. Thus what an apple is to one person may be an orange to another. Reality is relative and thus objective truth has no concrete foundation.

The problem is that reality exists beyond our perspective. Let's say one man is convinced that the object we have designated to be called an "apple" really should be called an "orange." This he finds to be truth and this he shall defend as truth. Granted, he probably will not convince many other people to change their perspective on what the object should be called but that is not the point we are making here. Unfortunately this is the major flaw of post modernistic thought. Everything about the argument for the post modernistic mind is based off of language and not on the object itself. Regardless of what we call the object--an apple, orange, peach, cat, windshield wiper--the object still remains as it did before. It will not disappear or change shape and conform to what our language has defined it to be; it will still be what it was before we gave it a name. The reality is not dependent on the language, but because it exists outside of our language and definitions, it is independent from our constructs and limitations. Simply stated, if there was no language, reality would still be real, we would just be lost and unable to begin to understand any of it. The true foundation of our language is the faith behind the words we use to define all objects.

Therefore what's left is reality and faith. What must be understood and reiterated is the fact that reality does not depend on faith, but that faith reinforces reality. It is as though reality only becomes real to us once two things occur--we first acquire knowledge and then have faith that the knowledge we have come to attain is truth. An example of this is the everyday activity of cities, states, or countries. I have never been to China, but I do read about how the church is being persecuted over there; I see pictures and read stories of people who are not receiving basic human rights and freedoms that we take for granted here in America. As I come to know of these things I have the choice of either believing them to be true or discrediting them as false stories that are developed to sucker people into giving them money. The organization that provides this news is also of good repute, which only aids in confirming the truth behind these stories. Even with this evidence, I still must make a decision of faith to trust in the knowledge of the reality I am presented. And so it is for every bit of reality, but some aspects of reality require more faith than others.