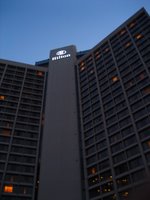 Each year Crusade does something very special for the students right after Christmas. Throughout the U.S. conferences are put on by Crusade for students in exciting cities and very nice hotels; in the Southeast Region we put on our Christmas Conference in the beautiful Georgian city known to many as Atlanta. Because we are Crusade and have any acronym for everything, the Atlanta Christmas Conference shall now be referred to as the ACC. This picture is of the Hilton, the hotel where the ACC was held.

The Hilton is located right in the heart of downtown Atlanta and there was an array of people there besides us because of the Peach Bowl, the Sugar Bowl, and some concert known as Widespread Panic. One of my favorite aspects about the hotel was the outdoor basketball court located on the 4th floor. 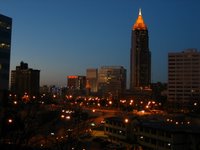 I love playing basketball and had the opportunity to do so with students and stafff on a few occasions while there, but nothing beat the view from that court at night; enough light from the city allowed my boy Zach and I to even play at night!

The staff had to arrive on the 27th in order to prepare for the students. I drove up with Amanda, one of my old STINT teammates, and we got there in the evening. The first thing was a dinner for all the staff to kick off the conference. We had a time of sharing and prayer and then we got into the work part of the night. There were a few meetings and some manual labor; before we knew it, the time reached 2:00 a.m. which meant BEDTIME!!! That night had to sleep in the main meeting room on a cot to act as "security," so there was little sleep to be had that evening.

My responsibility the following day was to greet the students that arrived and help them register for the conference. It was great to see a bunch of faces I did not recognize, and even better to see many faces from UF that I did. All in all over 500 students came to the ACC from universities and colleges in Mississippi, Alabama, Georgia, and Florida, including 70+ from the great University of Florida! 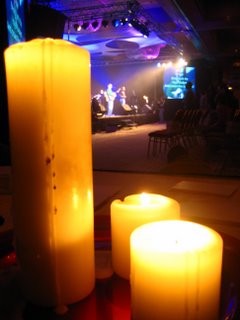 The theme of the conference was Compelled based off of the verse above. The main question posed to all the students and staff was, "What compels you?" Throughout the conference, speakers such as our National Campus Ministry director, Mark Gauthier, teaching pastor at Fellowship Bible Church, Tim Lundy, and the Director of Entertainment for Disney, R.K. Kelly brought more direction and truth to seeking out what really compels us in this life. Can we say like Paul that the "love of Christ compels us?" They spoke on our need to continually check our lives and make sure that our passions are aligned with the faith that we claim to have, so that we can honestly say we are compelled by the love of Christ and not by the lust for worldly comfort or longing to be recognized and rewarded by people. I believe it really affected the lives of many students as they were challenged to check themselves for at least a few days, bringing much before the Lord that I am sure they were not expecting when they entered the conference.

Equally amazing was the time of worship in music. Jonathan Munson, the Minister of Worship and Creative Arts at Johnson Ferry Baptist Church in Marietta, Georgia, and his band impacted us all with such a love for God and an expression of that love through music. The main thing I remember about him was his constantly looking upward toward the sky, as though he were gazing on Christ, while singing songs of praise to Him. There were many familiar songs sung as well as others that were introduced to us for the first time, which is something I prefer. They were amazing the whole time. 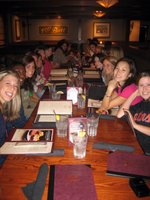 A highlight for me at the ACC was time spent with students from UF. I tried to eat most of my meals with them, making sure to see old faces and get acquainted with new ones. One night I met up with a whole bunch of students who went to Steak 'N Ale and got to meet some swell people, including Kimberly Russell who is on the bottom left of this picture. I shall mention her again later. Although the food wasn't great, I had a blast enjoying some fellowship over food with the students and it grew in me even more a desire to be serving with them at UF. 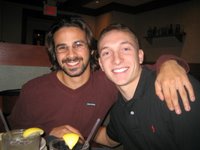 Another evening I was spending time with Zach (pictured here), catching up and having a really good conversation when we bumped into Kimberly and another student named Matt. All of them are involved in the Greek system here at UF; in fact, my connection to Zach is that he joined my fraternity, Beta Theta Pi, as a freshman when I was heading up the new member program as a senior. We have been tight ever since. Well Matt and Kimberly were talking about some ideas for ministry within the Greek community and before I knew it all three of us were chilling at a table talking about what we can do this semester to reach the Greeks for Christ. We know it is something that is going to take a lot of faith, saturating it in prayer. Their hearts for this ministry are deep and I look forward to serving with them when I arrive full-time.
DAY OF OUTREACH


The students also had the wonderful opportunity to give back to the community by handing out "Boxes of Love" to individuals and families throughout Atlanta who were in desperate need of food. We were encouraged to simply give them the food, sharing with them who we were and why we were doing it, and if they wanted to spend more time with us, then we could talk and listen with them in hopes of not only sharing the Gospel in action, but also in word.

I went with 10 students to an apartment complex in Shallowford. Before we went out, we spent some time in prayer, asking the Lord to give us good chances to share our hearts with those we were serving, showing compassion and really listening to their needs.

I went out with two students I had just met, Amanda and Daniel, to our designated apartment. When we arrived there was a note on the door threatening anyone who was trying to sell anything with a call to the police. We were a little frightened, but since we were giving away free food we figured it was okay to knock. Unfortunately no one was there so we began walking away when a little girl named Kaitlin said, "Are you looking for the people in F-3?" 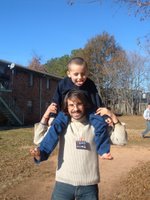 We said yeah and she told us that she, her brother and sister, and her mom all lived there, but were at another apartment that also received a Box of Love. We all decided to head over there and meet them all.

We arrived to find her younger brother, Sergio (pictured with me), and her younger sister, Elizabeth, wrestling on the floor, having a great time, while her mom, also named Amanda, talked with the resident of the apartment who's name was David. We spent about an hour there, going between adult conversation and play time with the kids; they were extemely energetic and were wearing us all out.

Then we decided to go outside and find the others. The rest of our group was by the "playground," which was like one found in the backyard of a typical home in the suburbs. The sandbox was more like a dirtbox and we were warned to be careful because a lot of broken glass had been found in there. As soon as we arrived, two students had gathered a few of the other kids around to hear the story of Jesus. 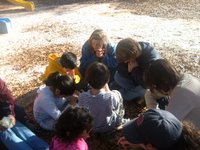 This time was very exciting for us because the kids began reading a booklet that describes the Gospel and how to have a personal relationship with Jesus Christ. What surprised me though was that they were teaching us! We would ask questions about who He is and what He did and they said things like, "He died for us;" "He is our Savior." We all decided it would be good to pray to Him and thank Him for all that He has done. Two of the kids, one boy and one girl, even prayed, thanking God for the simple things like food and water. It really was something beautiful.

We played with them a little bit more, teaching them the game where you place a bat on the ground, holding the bottom with your hands and placing your forehead on the tip. We had them close their eyes and spin around 10 times before racing each other to an air conditioner and back. They were hilarious as they lost their way and ran off the path, and in some cases almost running in to walls!

I had a great day and continue to pray that the Spirit work on their hearts as they grow up in a world very different than the one many of us have experienced.


The final thing everyone did together was ring in the New Year. We set up the basement of the hotel like a club and called it The Underground. The nights before were filled with live music, card games, and even dodgeball matches, but on this night it was strictly a club, with a dance floor and DJ. I had been working security the whole conference, checking ID's (i.e. nametags) to make sure no one was sneaking in to any of the events. I felt like a real bouncer on this night, having to turn some folks away because of lack of identification. 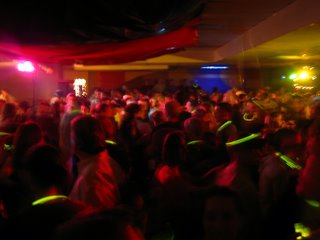 We had two large monitors in the room, one for the ball drop in NY and the other for the peach drop in GA. The clock struck 12:00 and we all yelled, "HAPPY NEW YEAR!!!" seeking out friends and loved ones to give them hugs and in some cases kisses (for those married folk of course). Then the party began as nearly every genre of music played for the next two hours and we all danced hip-hop, 80's, linedancing, swing, and to some degree, salsa. 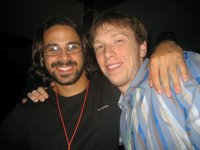 The party continued for the staff after all the students left as we had to clean everything up. By the time we were finished around 3:30 in the morning, Russell (pictured right), Allen, Ryan, and I decided it would be great to go grab some food at Steak 'N Shake...great idea, right? We got to Steak 'N Shake and the place was packed with all the late-night partiers who were out in Hot-lanta celebrating. We figured the next best place would be IHOP so we drove more, getting there around 4:00. There was some good conversation, but even some better eating, all of us getting silent once the food came, our mouths being too stuffed to talk. After I finished my meal I barely remember anything; I just know I went to be very late and had to be up very early. But it was all worth it.

I think overall I got about 20 hours of sleep in the 5 days I was there, the 5 memorable days I was there. It was a great mix of big meetings, hard work, good times with friends, prayer with my brothers and sisters, outreach, and my favorite--deep conversations.

I hope you were able to enjoy reading this almost as much as I enjoyed experiencing it. To view more pictures from the ACC and the rest of my Christmas time, please click on the link below.

Much love in His grace.