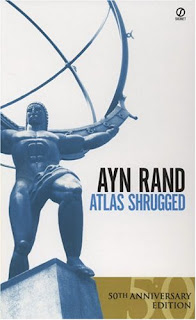 Many of you have never heard of Ayn Rand. Some of you may have. I for one got introduced to her through my 11th grade AP English teacher, Ms. Zawacki. The summer entering into the school year we were required to read The Fountainhead, which for some reason or another I read more thoroughly than any other book I have read in my life save the Bible.

Well I entered a national essay contest for the book and was picked as a semi-finalist, with my prize being her landmark novel, Atlas Shrugged. I didn't actually receive the book until eight years later, so I began reading it last summer knowing how much I enjoyed The Fountainhead.

Without getting into too much detail, Rand's philosophy is called Objectivism. The ideal for her is the self-made man who uses the material world to pursue his most selfish interest. For Rand this is considered to be "every individual's highest moral obligation." She wholeheartedly believes in Capitalism, fighting tooth and nail against a society that is built on "meeting the needs of the helpless." Rand would say that the strength of the human being should never render anyone "helpless."

With the title for her philosophy being Objectivism one could easily conclude that she was a modern thinker, believing in the power of reason. She lived in a time when post-modernistic thinking began taking over in Europe, at least at the intellectual level, but had yet to really make it over to America. This novel is written in light of that and as a warning to what could happen to a society if post-modern philosophy governed it (through politics, education, art, architecture, science, etc.).

Here is one of the most pointed quotes against post-modernism in the entire novel given by a composer named Richard Halley who retreated from the world after giving his greatest performance with his greatest concerto to the main character, Dagny Taggart:

Have you heard the moralists and the art lovers of the centuries talk about the artist's intransigent devotion to the pursuit of truth? Name me a greater example of such devotion than the act of a man who says that the earth does turn, or the act of a man who says that an alloy of steel and copper has certain properties which enable it to do certain things, and it is and does--and let the world rack him or ruin him, he will not bear false witness to the evidence of his mind! This, Miss Taggart, this sort of spirit, courage and love for truth--as against a sloppy bum who goes around proudly assuring you that he has almost reached the perfection of a lunatic, because he's an artist who hasn't the faintest idea what his art work is or means, he's not restrained by such crude concepts as 'being' or 'meaning,' he's the vehicle of higher mysteries, he doesn't know how he created his work or why, it just came out of him spontaneously, like vomit out of a drunkard, he did not think, he wouldn't stoop to thinking, he just felt it, all he has to do is feel--he feels, the flabby, loose-mouthed, shifty-eyed, drooling, shivering, uncongealed bastard!"

He goes on to basically conclude with these words:

"I'll take the operator of a coal mine over any walking vehicle of higher mysteries. The operator knows that it's not his feelings that keep the coal carts moving under the earth--and he knows what does keep them moving."

Now of course I do not agree with Ayn Rand in everything she wrote, and I find many flaws in her philosophy. We work from very different frameworks, mine of course being Christian with God as the foundation, His Spirit permeating through every fiber of life and understanding. But John Calvin wrote, "If we regard the Spirit of God as the sole fountain of truth, we shall neither reject the truth itself, nor despise it wherever it shall appear, unless we wish to dishonor the Spirit of God," so I have sought to filter truth out of Rand's philosophy, and her analysis of post-modernism is dead on, particularly for a woman who wrote against it 30 years before it really began rearing its head in America.

Along with Rand I believe we must fight against this idea that "feeling guides truth" and truth is relative based on perspective and feeling. In reality it is cowardly, requiring very little real thought, although many spend their entire lives developing the philosophy and seeking to work it out "practically." The phrases "whatever is true for you is true for you" or "do whatever makes you happy" are blanket statements of laziness that require no conviction about anything nor care for any individual. Sadly I know so many people that use them regularly. Values, morals, and ethics are tossed out the window with careless, thoughtless, empty words such as these.

I am concerned for us all in how we have allowed this philosophy to creep into our lives. I have given much thought to it as I walk with Jesus--who is the truth--wondering and praying about how much I have sold out His truth for foundation of sand that is post-modernism. I pray that the light of His truth continues to penetrate every fiber of my being. I pray that for us all.