That's how much time I and a group of new friends spent in the Windy City last night and oh how so much happened!!! This trip was the first of many excursions to Chi-town. Just so you know, as I have been corrected by my very kind friend Zach Wetendorf, it is pronounced "Shy-town." This is confirmed and also challenged by great nickname masters.

We decided to drive down, which was a bit painful, taking what could be a 30 minute drive nearly two hours. Truth is I didn't mind and no one else in the car really did as we got the chance to have good conversation. This would have been more frustrating of course if we were going to work at one of the ridiculously tall buildings in the heart of the city, or performing at the symphony, or if we had dinner reservations. But none of these were reasons for our little jaunting in the City. The Art Institute of Chicago was having it's final weekend of free nights so I made a last minute decision to head down with a group of about ten to check out some sweet art. 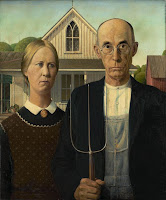 I wasn't too aware of what pieces were in the museum, but was able to see some fairly famous works, which was awesome. The one we are all most familiar with is the one seen here, called American Gothic by Grant Wood. This has been parodied countless times in films, photos, cartoons, etc. It was interesting to read the story behind the photo and to see in person what Wood was trying to depict. Those faces were probably genuine as his dentist likely vowed to pull everyone of Wood's teeth out for making him do this and the daughter stared at her father mad at his volunteering her to do this. Maybe I am reading too much into the painting, adding my own flair, much like those who read too much into the text of Scripture, adding their own flair. Dangerous.

Another piece that was familiar to me and I believe is fairly famous was a Post-Impressionist work called A Sunday at La Grande Jatte by Georges Surat. The only reason I think this one is famous is because I put it together as a puzzle during one of my Humanities classes back as a junior in high school. That and just as I looked it up on Wikipedia I was reminded it is one of my favorite movies, Ferris Bueller's Day Off during the scene where they all go to the Art Institute. The scene is more memorable to me because of the cinematography and score. But I digress.

There were several other works I really enjoyed, including some photography and an entire collection devoted to miniature rooms, but I shan't tell anymore of the museum because there's so many other things I got to do and see.

We split up for about an hour, so I decided to head down to Grant Park for the 30th Annual Chicago Jazz Festival. Among thousands of people I arrived as Dee Dee Bridgewater was wrapping up her "Tribute to Betty Carter," which I found fascinating really. I don't know much about jazz, save a History of Jazz course I took in undergrad, but there was something electric about the songs she sang. The final number was a mini tribute to a jazz musician I have heard of, Nina Simone, called Four Women. Extremely powerful.

One observation that brought me joy were two men adjacent to each other. The first was an older black man, maybe in his 50s or 60s, standing, still in his McDonald's work uniform. He had headphones around his neck which were plugged into a sweet 1980s Sony Walkman clipped to the wasteband of his pants. I saw his pearly whites exposed in elation over the smooth voice of Ms. Bridgewater. Just to his right was a white man of a few years younger, shaved bald head, sitting in the grass with his arms holding his legs together in the Indian-style. He was just as enthralled, though his expression was a close-mouthed smile and a continual rocking back and forth. I thought it so neat to see jazz music bring these two gents together. I would be remiss if I did not share that I pray for this kind of elation, joy, and unity found in Christ, where it is true, pure, and everlasting.

I left the jazz festival feeling really good, in awe of the fact that I am living in this place and have been given this opportunity by God. It is still extremely surreal. However, I was brought back to some semblance of reality, though an odd reality, when on the street corner, rivaling the jazz just a block away, was your friendly neighborhood Mennonite choir, singing melodies to Jesus and handing out evangelistic CDs. I can picture Alanis Morrisette singing,

It's like Mennoniiiiiiiiiites in the Windy City,
Rivaaaaaaling the jazz festival...

We got to talk with Matthew from Canada who told us they do this every Labor Day Weekend. Though extremely ironic, I thought it was quite cool. I'm surely trying to work through what evangelism and missions looks like in this culture and in a city of this size.

Our final excursion of the evening was hitting up Navy Pier. By this point most of us were content with just standing around and talking. A few got on the famous Ferris Wheel. The highlight to this and the rest of our night was the great theological discussions that took place over eschatology (end times theology) and the spiritual gifts. What a privilege and joy to be in a place where so many are thoughtful about their God, loving Him not only with their hearts, but also with their minds. They also were so kind to sing "Happy Birthday" to me.

All this in just five hours...well seven with traffic.