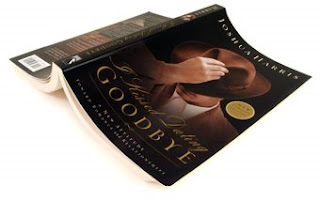 To be honest, this is a book I have stayed away from ever since I heard the buzz going around back in 2003-2004. Furthermore, I am not too aware of the content, merely the concept. What Joshua Harris suggests in his book is that dating isn't necessarily bad (he would go for a more courtship method), but bottom line is that one should not pursue romance until one is ready to really commit. He writes on his website that "many readers who start out critics [I admittedly have been one] of I Kissed Dating Goodbye are surprised to learn that the core message of the book isn't about "dating," but living your life for God."

Well without having done any real research or inquiry until now, I am a bit curious. And it seems that others, including non-Christians are curious as well. C.J. Mahaney, leader of Sovereign Grace Ministries wrote in his blog about a curious endorsement from an unlikely source:

An endorsement for Joshua Harris’s bookI Kissed Dating Goodbye (Multnomah, 1997) has come from an unlikely source: Donna Freitas, a feminist and liberal professor of religion at Boston University.

To read the rest of the article, click here

Email ThisBlogThis!Share to TwitterShare to FacebookShare to Pinterest
Labels: Dating, For Fun