Skeptic? Critical? Envious? See How He Loves Us!

Jesus wept. So the Jews said, "See how he loved him!" But some of them said, "Could not he who opened the eyes of the blind man also have kept this man from dying?"
-The Gospel of John, Chapter 11

Envy. I would be exactly like those who spoke against Jesus. God has taught me a lot about envy these past few days as I grow to understand it more from the perspective of "sorrow at another man's success." I could be envious of some guy in the marketplace who is doing extremely well for himself according to this world's standards, making more money than I could ever know what to do with in my lifetime. Envy is not sorry over his soul; it's over his possessions. Anytime I walk in a big city like Chicago I am quickly tempted to be envious of the people who valet park their cars at the gigantic Marriot. I watch the valet drive away in their Mercedes as bell hops rush to get their Gucci bags for them so they can be waiting upstairs at their suites. I could be envious of the former CEO of Merril Lynch who used to be helicoptered over to a golf course after work in order to get 18 holes in before the day ended. I am tempted and sometimes fall for that temptation by putting them down, not angry at their sin or their indulgence, but angry because they have what my flesh wants. I could be envious of the guy who is better looking, more athletic, smarter than me, in a happy relationship, but none of these compare to being envious of someone alongside me in the Christian walk.

There were Jews who had come with Mary to the tomb of her brother, Lazarus. As best as I can understand, they must have somehow been connected with the family and wanted to pay condolences. They also seemed to be intrigued by the person of Jesus as they had heard that just days before he had healed the blindness of a man. Jesus was deeply moved by mary and the Jews' response to Lazarus' death and he asked where they had laid him. She took him over to the tomb and Jesus' immediate, initial reaction is to weep. To weep. Jesus. Wept. He wept. This does not connote tears just welling up in his eyes, or one tiny droplet running down his cheek. Could you imagine losing one of your closest friends? How would you react at his or her funeral? I know some try to hold their emotions in at a funeral, not wanting to be perceived as weak, but that wasn't Jesus' take. This breaks all the stereotypes of the stone-faced Jesus who knew no emotion. This was his care. His compassion. His love. Weeping does not equal weakness and he would soon show how strong he really was.

The Jews saw this. Most of them. Most responded by witnessing the love of Christ being poured out through His flood of tears over Lazarus' death. These Jews rightly commented on Jesus' reaction saying, "See how he loved him!" But there were some who reacted another way. Others said, "How is it that this Jesus could heal a blind man, but couldn't even prevent his close friend from dying? Who does he think he is?" Some might say these other Jews were skeptical, much like the critics today, who challenge God, saying "God, if you are truly real, reveal yourself to me. Show up at my door. Just for a second. If you are real and you want me to know you, that's all I need. Then I will believe. If not, you're not much of a God and I don't want to believe in you anyway."

Although this might be part of the truth, I think there might be more to it. I think these folk were envious of him, knowing the stories being told, knowing there was something mysterious about him. They were there, seeking him only weeping and their response wasn't continual sorrow alongside him over the loss of Lazarus; instead it was a critical attitude toward Jesus, saying if he had healed the blind man, why couldn't he prevent this? What kind of healer are you, Jesus? 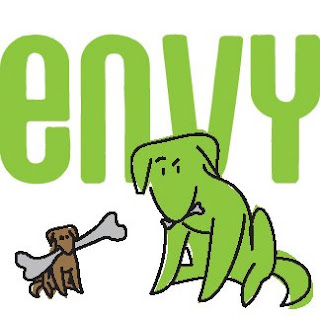 Their response was in part a critique from envy toward Jesus, who many were calling "The Prophet" and even "The Messiah!" But who does he think he is? He can't even prevent this man's death! This is a bitterness that is pinned up against the beautiful, caring, loving, powerful, mighty Jesus Christ. The envy holds strong enough to the poin that even after he conquers Lazarus' death by raising him to life--an action that should silence any skeptic or critic--these Jews go and report it to the Pharisees who, from that day, "made plans to put him to death." These people who claimed to be religious were steeped deep in envy and were unable to enjoy God and his might works.

Here is the danger for Christians who are envious of other Christians. Our Triune God is restoring his Kingdom right now. That is beyond questioning. This same God is also choosing to do so as he sees fit with whom he chooses when he chooses where he chooses and how he chooses. His plan and actions are greater than ours and his lowliest work is infinitely greater than 10,000 valiant human acts. As a result different parts of the body function in different capacities and serve a wide-range of purposes. All the parts of the body are working together for the glory of God and his Kingdom. But envy takes our eyes off Christ and off this purpose, instead fixing them on the other parts of the body as a hand now wants to be a foot. Rather than rejoicing in how God is using his feet, the hand criticizes it and think it deserves to take the foot's place or receive as much recognition or responsibility as the foot. The hand forgets its job, its responsibility, and stops serving the body or it tries to do more than God has given it to do, overworking itself, the body, and making things disjointed all together.

So I pray for the skeptic non-Christians, who continually present challenges to God as if he owes it to them to reveal himself in a greater way than through the love of Christ that has already been put on display through his death on the Cross and his own beautiful resurrection. But I also pray for Christians and myself, that we can be like those Jews who saw the true love of Christ toward his friend, able to see in the lives of Christians all around me and the world how the Holy Spirit truly is working in their hearts, through their lives, for the Kingdom and for God's glory.