In light of the baseball playoffs, though sadly ending very prematurely for the Cubbies, I figured I would throw an article relating to baseball history here in the Chicago area. It is of course one of the most infamous stories in all of sports history:

The Black Sox
A fixed World Series casts a shadow over the national game. 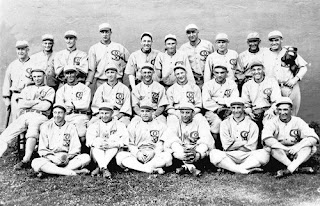 The 1919 White Sox--the White Sox of Eddie Collins, Eddie Cicotte, Dickie Kerr, Ray Schalk, Buck Weaver and "Shoeless" Joe Jackson--are considered by baseball historians to be one of the greatest teams ever to take the field. But there were rumors about these Sox even before Cicotte's second pitch hit Morrie Rath, who was the leadoff batter for the underdog Cincinnati Reds in the first game of the World Series, played on this date. "I don't know yet what was the matter," Sox manager Kid Gleason told the Tribune's James Crusinberry the day the Reds won the Series. "Something was wrong. I didn't like the betting odds."

Those betting odds, in fact, had been a story even before the Series started. Bookies had made the Sox 7-5 favorites to win it all, and there was speculation those odds could go as high as 2-1 by game time. But in New York, a sudden and unusually large amount of cash was bet on the underdog Reds, sending odds there crashing toward even-money. After the Game 1 loss, White Sox owner Charles A. Comiskey told intimates he suspected a fix. The intimates suspected sour grapes, but the Reds would win the best-of-nine Series in eight games. Gleason was right: Something was wrong.On Sept. 28, 1920, the indictments came from a Cook County grand jury. Eight ballplayers were charged with conspiracy to commit fraud: Cicotte, Weaver, Jackson, Fred McMullin, Swede Risberg, Chick Gandil, Happy Felsch and Lefty Williams. Cicotte, whose plunking of Rath signaled that the fix was in, said he got $10,000 from gamblers. Jackson, who was promised $20,000, got only $5,000. When he complained, he said, Risberg threatened to kill him if he went public. So Jackson kept his mouth shut--and hit .375 in the Series. Defense lawyers argued that although the players admitted taking money to throw games, they had not intended to defraud the public.

"I guess I'm through with baseball," said Shoeless Joe. They all were. The jury acquitted them, but new baseball Commissioner Kenesaw Mountain Landis banned the eight "Black Sox" from the game forever. The suspected fixers got off clean. The man thought to be the power behind the fix, New York gambler Arnold Rothstein, never went to trial.

The White Sox, who won 96 games in 1920 to finish in second place, were a shambles. The next year, they wound up seventh.

It would be 1959--40 years after baseball's biggest scandal had destroyed a marvelous team and shaken the national game--before they would win another pennant.

By Alan Solomon | Tribune staff reporter
Posted by Unknown at 12:07 AM