10 Days of Work and Pleasure: Pleasure 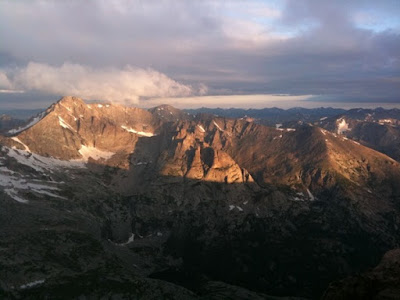 That was all two years ago.

One of my goals for the pleasure portion of the Colorado trip was to hike a 14er (a 14,000 foot mountain). The original plan was to hike something other than Long's Peak because I had conquered it before. However, my good friend Rick had never done it and he convinced us (TJ and me) that we should do it again. So we did.

To hike Long's the group must start in the dark. We chose 2:00 am as our start time. Without too much detail, this meant 20 minutes of sleep for TJ and me, zero minutes of sleep for Rick. I woke up feeling woozy, dizzy, frizzy, and any kind of "zy" you can think of. I was hesitant to go, but made it to the car. That was the first step.

Long's is a combination of hiking and climbing. Labeled a "Class 3," Long's can be very difficult at points; in fact, only 3 out of every 10 people make it to the summit. It's a 15 mile round-trip, 7 1/2 up and back. The first 6 miles up takes about 3 hours, the other 1 1/2 miles takes about three. I didn't think I was even going to make it past mile 3. I literally wanted to fall asleep every step of the way. When we stopped the eyes definitely shut and all the rocks looked like fluffy pillows waiting for my head to crash on them (which would have been bad).

Somehow, I made it to the Key Hole (it looks like a hole where a key would go. creative, I know), which is where the photo at the top is taken from. We got there about 6:30 am. I let TJ and Rick go ahead because they were steaming past me already. Therefore I mainly climbed alone, stopping often, and even sleeping on the side of the mountain for about 30 min. Passers by actually were jealous, knowing I had claimed a sweet spot.

I eventually made it to the top by 9:00. On my way up I saw Rick and TJ coming down. They were shocked along with me that I made it. They continued past me, and again I found myself alone. The way back down was much more difficult than the way up. My body felt like it was slowly falling apart, like a car that has minor problems fade into larger ones. The machine is no longer what it was.

Walking down the path for a few miles was partially a sigh of relief, partially realistic exposure that two years can do a lot to a body, even if it is only 26 years old. The bones groan along with the fallen creation, awaiting the day when there will no long be any pain.
Posted by Unknown at 7:26 PM

Email ThisBlogThis!Share to TwitterShare to FacebookShare to Pinterest
Labels: Personal