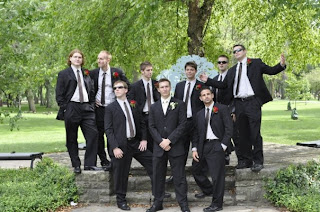 It all began on Wednesday, July 8th when my boy Casey Sapp rolled into town (well he had been here for a few days from China, but to me he had just gotten here). We hung out for a bit and drove out to The Wetendorf's. There we would begin what became five full days of festivities because Mr. Zach Wetendorf and Ms. Morgan Cawthorne were getting married that Saturday. I was the Best Man for this spectacular event and I do believe I had one of the best times of my life. I think the wedding and reception were so gospel-centered, where, although the day was in many ways about Zach and Morgan, they made sure to point everyone there, Christian or not, to Christ. The day itself lasted nearly 12 hours when all was said and done, most it being us cutting a rug on the dance floor. 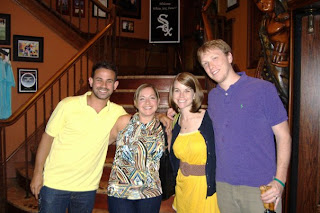 When the dust settled and Zach and Morgan hit the road, friends still remained here, including my old-boss-still-close-brother, Jimmy. We got to tour the city a little bit and get some solid time together before he went back to Florida. Less than 24 hours later my Auntie arrived! The revolving door of festivities and visitors had not stopped; in fact, she and I kicked it into high gear. We had a solid mixture of regular tourist things--top of the Willis (Sears) Tower, Millennium Park, etc.--along with regular local things--going to a movie, visiting The Wetendorf's in the burbs. I had a wonderful time with her here and I believe she would say the same thing if she had some words to type in this bad boy.

Again, less than 24 hours after she left, I was on a plane headed for Colorado. That's where the next entry picks up.
Posted by Unknown at 6:45 PM

Email ThisBlogThis!Share to TwitterShare to FacebookShare to Pinterest
Labels: Personal