I'm Blown Away...And You Will Be Too! 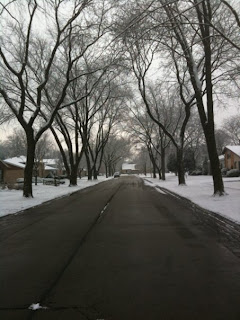 This story starts off like my morning did -- mudane with a mixture of awe and frustration. I'm running on two hours sleep right now after finishing my last big paper of the semester. I was staying at my friend Russell's house out in Arlington Heights and I was running late to campus. The awe came from seeing the snow actually settle on the ground & in the trees for the first time this year. Beautiful. However, it was quickly met with frustration as I was backed up in traffic as I merged onto a major road. We were at a dead stop for the most part, but there was enough space for a car in the lane left of me to enter my lane just in front of me. I let out a loud "Uuuuuuuggghhhh" as the car came in, not so much upset with them as with the painful reality that I was gonna be extremely late to class and consequently in dropping of my paper. I texted my a friend in class to let him know I was in a dead halt with the hope that he would tell the professor, who would ultimately be sympathetic to my situation, right?

Well about thirty seconds after texting him I see a Toyota 4-Runner to my right trying to pull into traffic from a side street that was perpendicular to us. But the lady driving wasn't slowing down; in fact it looked like she was gonna try to cut to her right, go offroad, and avoid everyone altogether. That didn't work. Instead her 4-Runner barreled right into the Toyota Avalon directly in front of me -- the car I had just let in! First words out of my mouth: "OH SNAP!" 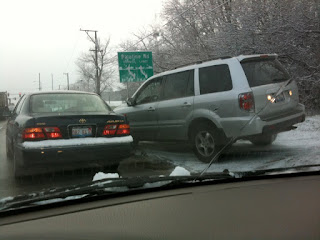 Here's where the story gets creepy, weird and beyond coincidence. Let me remind you that I am on my way to campus to drop off a paper on how the God of all things is a Trinity -- God the Father, God the Son, and God the Holy Spirit, yet all one at the same time.

I pull up in front of them, figuring that I could be a witness to the whole thing. The lady on the passenger side of the wrecked Avalon, all shaken up approaches me as I tell her that I'll be a witness to everything. She proceeds to tell me that she and her husband are on their way to her sister's funeral. In that moment my heart dropped for them.

Next, her husband, a Middle Eastern man about my height, comes up to me as we're trying to figure out how to call 911 from a cell phone (Note to readers: "911" doesn't work on cells; *999 is what you call for an emergency. I didn't know that. I think it makes little sense). He was calm and collected, but amazed. He began to tell me how right before the lady crashed into them he was trying to console his wife by explaining to her how God is in complete control and that he can let anything happen at any moment, including them getting hit by another car in traffic. He said that no more than five seconds later the woman ran into them!

His wife is on the phone and I come to find out that her sister was only 48. She was a doctor of some kind and died of cancer. He said they couldn't get to it in time. At this point are standing at the other woman's car, writing up a statement we can all sign since no emergency vehicles would come at this time for this type of accidnent. The lady asks me where I was heading. "I'm heading to school, ma'am." The man asked what I studied. "I study theology." They both were like, "theology!?!" as if this wasn't weird enough.

I noticed the lady shaking heavily, shifting between composure and crying. I offer my coat. I think she was in shock because this was capping off a difficult morning for her already. She has a headdress on. She's covering up her bald head. She herself has cancer. She was actually on her way to chemotherapy before she hit the Avalon. Yeah, the Avalon driven by a man taking his wife to her sister's funeral. Her sister who died of cancer.

In the midst of all this, the man finds to begin conversation with me about God. He tells me that he's Muslim and actually a direct descendant of Muhammad. At some point I tell him that I'm actually driving to school to drop off a paper on how God is Trinity. We could have gotten into some interesting discussions in that moment, which he really wanted to pursue. I didn't. I went to my car to get my cards, of which, interestingly, I only had two left. I felt it best to let his wife grieve and let them get to the funeral, so I gave him a card to contact me. The other one I gave to the lady as she drove off to her chemotherapy appointment, knowing somewhat the pain and confusion she has in her life right now. She took it and with a soft, perplexed voice said, "you study theology, eh?" I tried to say compassionately, "yes, call me anytime."

I then got in my car, drove off, blown away at what just happened.

To recap. I'm late dropping off a paper on the Trinity. I let a car in front of me that proceeds to get hit by a lady. The car in front of me has a devout Muslim man and his wife whose sister just died of cancer. The woman who should have hit me, hit them instead as she is on her way to chemotherapy because she herself has cancer. The Muslim man in the midst of all this wants to talk to me about God and how he's not Triune, even though he knew I just finished an extensive paper on it less than five hours before. All this in a matter of 20 minutes.

I was silent in my car. I didn't know what to do. Eventually I was like "Holy Crap!!! Did that just happen???" I began to pray because I didn't know what else to do. I can't make up a story like that (someone might be able to, but not me). I can't chalk it up to chance or coincidence, though I know many would want to. I still have yet to flesh it out any life lessons personally as the story is still fresh and nearly unbelievable. However, I do hope they both call me at some point. It just seems like that was not an end, but a beginning.

Finally, to top it all off I arrived to class just as they finished, ready to tell everyone and turn in my paper. When I got there I found out the topic of our last lecture: God's providence.