The Essential Edwards Collection is 50% Off

For the thinkers and theologians: What if you could know the most important theologian in evangelical history?

Or as a pastor or parachurch leader, what if you could know the most important pastor in American history?

Now, at least in some way, you can. Owen Strachan, PhD student at Trinity and professor at Boice College, and Edwards scholar Doug Sweeney have released a five book set called The Essential Edwards Collection. Pastors and lay persons alike are privileged to have this perfect introduction to one of the most influential minds in all of history and a clear window into the heart of a man who deeply loved God and sought to enjoy Him in all aspects of life.

From Tuesday, July 27th until August 2nd, Westminster Books is offering a discount of 50% off the cover price ($44.95), making them $22.50, which is equivalent to getting one book free at the current Amazon price. 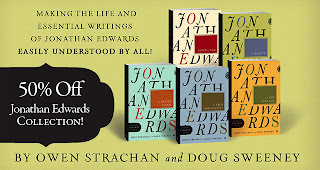 Many people don't know this, but Jonathan Edwards did not become a Christian until late into his teen years. Scholars note that although he grew up in the Puritan era, exposed to the church and the gospel of Christ, it was not until age 19 before he had "a sense of the glory of the divine being" while reading 1 Tim. 1:17 over and over again.

Though brilliant beyond his years, Edwards still grappled with many of the same struggles of teenagers these days. Yet when convicted so deeply of his own sin and the magnificent beauty of God's grace through Christ, Edwards was freed by God to explore the countless questions in his heart as well as God's matchless beauty, for pastors, theologians, lay persons, and others have benefited from centuries since.

This essential collection taps into various aspects of Edwards thought and life. Much will be new and uncharted territory for those who have only been exposed to the five minutes Edwards receives in high school American histor reading out-of-context excerpts of Sinners in the Hands of an Angry God.

My personal favorite is Jonathan Edwards on Beauty, which explores Edwards' meditation on the subject and how we can have a Christian framework for understanding and experiencing the beauty God has planted in His world. Commenting on Edwards words concerning God and beauty, Strachan writes,

Beauty was not a concept one could abstract from God, but was the very essence of God. Thus the realm God created displayed His beauty. Creation derived not from pragmatics, from a mere desire by the Creator to create. Creation existed because God desired to put His glory, His beauty, before a celestial audience.

Other titles include Edwards on the love of God, the good life, true Christianity, and Heaven and Hell. Endorsed by pastors such as John Piper and theologians like D.A. Carson, this Edwards collection is essential in every sense of the term. At 50% off it's both a can't miss and a must buy.

Blow Up Some of Your Memorial Stones

The people came up out of the Jordan on the tenth day of the first month, and they encamped at Gilgal on the east border of Jericho. And those twelve stones, which they took out of the Jordan, Joshua set up at Gilgal. -Joshua 4:19-20

The Story
This was such a momentous occasion in the life of Israel. In a fashion that resonates with their escape from Egypt, the Israelites were able to cross the Jordan River with the help of God alone who "dried up the waters" so that the entire nation could cross over and into the land He had promised them 40 years earlier. Though much work and fighting still needed to be done, they were finally in their land. The closest contemporary example is the Cubs' finally winning the World Series.

After they all had passed, God commanded Joshua to get a man from each tribe - twelve in all - to gather twelve stones "from here out of the midst of the Jordan" (v. 3). Once they had done this, they took those stones and set them up at Gilgal. These twelve stones were a memorial for the people of Israel forever (v. 7). It was for that generation and all the generations to follow to remind them what God had done and to ensure that they feared the Lord their God forever (vv. 21-24). The purpose was to keep the nation's eyes on God, going beyond mere acknowledgment of a past event, but to actually evoke an sincere, sober response toward Him. This was the first, and most prominent, of seven such stone memorials established throughout the book of Joshua (7:26; 8:28-29; 8:30-32; 10:27; 22:34; 24:26-27).

My Own Stone Memorials
My first reaction was awe and excitement because I got a great idea, which doesn't happen too often. Though I don't have kids yet...well I don't even have a wife yet...or a girlfriend (minor details), I thought how amazing it would be to go back to places in my life where the Lord has worked so mightily and place my own stones there. I could go back to the church near Tampa where I heard the gospel for the first time when I was 11 and put a stone there. I could go back to the University of Florida and place a stone where I knew God was speaking to me so powerfully with the simple words, "help people." I could go back to my apartment in Italy and place a stone where God had brought me to a place of repentance and biblical community such as I had never known before, which led to much deeper understanding of the gospel. And then, one day, instead of taking a road trip to Canton or Springfield or Cooperstown or Disneyland, I could take my children on the "stone memorial tour" and show them the story of my life through the Lens of the Triune God's work in it. It's amazing in my head now, but by that point in my life my kids may ask why I didn't just show them pictures or a hologram of these places.

Stones in the Wrong Places
Something strange happened just the day after I came up with this idea. I was slapped in the face by reality, sin, and the fallen world we live in. I realized something I had never really thought of before. I have spent much of my life putting stones in the wrong places. Honestly, when times get difficult, metaphorically speaking, instead of going back to all those stones where I can recall and rejoice in God's work in my life to lead me back to a healthy fear of him, I go to the stones where I've experienced painful rejection and loss, utter discouragement and abandonment. I go to those stones and I sit there, resting by them, taking in those moments that have passed years ago, but haunt me to this day and affect the man that I am. These stones are not there to remember what God has done and the purpose for which I exist; they are there out of bitterness, a lack of forgiveness, anger and self-pity.

And I know I'm not the only one. Many people, though they wouldn't word it this way, have lodged these destructive memorial stones so deeply into their minds and hearts, smoothing them out over the years to make them as comfortable and "nice" as they can be as they try to rest near restless places.

Blow Them Up
I think everyone has a memorial stone or two that's in the wrong place. On the day that I realized this I began praying that God would blow them to pieces. I began praying for their complete destruction, knowing that if they remained they could destroy me. I am the first to admit that those experiences in my life helped shape who I am and I firmly believe in a sovereign God whose guiding hand is present even in the most difficult of circumstances. But unlike the twelve stone memorial in Gilgal, mine are not in places of celebration. When I go back to these spots I do not rejoice in what God has done. These places are real, and they are places to pass through. But they are not places I should stop at.

So where are your memorial stones? Which ones have you set up that you would want to take your children to and show in order to tell God's story for your life? Which ones are those that haunt you when you experience your own rejection, loss, discouragement or abandonment? Which are the stones that define your life?

Now that I think about it more, maybe our children just need to go on the whole journey so they can see the ones that were or need to be blown up and the ones they can rest by with us.