I grew up without a father. By this I mean that he was never a real presence in my life emotionally, physically or spiritually. My mom and dad never married. Though we lived in the same city during most of the first 12 years of my life, I only saw my father twice (as best as my memory recalls). He was not one of those washed-up deadbeat guys who was in and out of jail, struggling with drugs or any of the stereotypes that are associated with fathers who are not in the lives of their children. My dad was in fact a successful businessman. He was a co-owner and operator of a high-end steak and seafood restaurant, which he began around the same time I was born. They closed their doors in January. I know because I read about it on the Internet. I saw a picture of him in that article, serving customers (with what I know of him, I know he loved to be a server there). It was the first time I had seen him in over three years. As you can tell, this has affected me more than I realize. It is coming to the fore as each day, month, and year passes. I have heard the phrase "father wound" tossed quite a bit. I'm sure there are technical definitions behind it and I'm sure experts have weighed in on what it exactly means. I don't know those definitions or the experts, but I do know what I've carried throughout my life and I think "father wound" is both appropriate and lacking. Maybe father gash?

Wound or gash, one of the beautiful realities I have come to seize in really just the past year has been God's adoption of me as his son through the True Sonship of Jesus Christ. This verse sums it up pretty well:


But when the fullness of time had come, God sent forth his Son, born of woman, born under the law, to redeem those who were under the law, so that we might receive adoption as sons. And because you are sons, God has sent the Spirit of his Son into our hearts, crying, “Abba! Father!” So you are no longer a slave, but a son, and if a son, then an heir through God. -Galatians 4:4-7

I have known these words since I first read them over a decade ago. But it is as if they are being experienced for the first time in my life, much like those instances where you catch yourself throughout the day and just say, "this is all real." Much of life is mindless; but those moments when reality meets mind make life poetic, raw, emotional. That is when truth is known holistically. 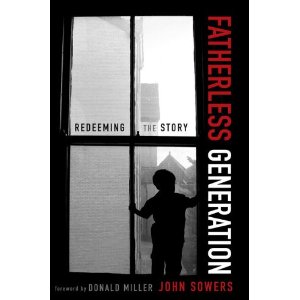 Each day I am relearning that God is a father to the fatherless (Psalm 68:5). Part of that journey is looking at the lives, experiences, and stories of those who are in a similar boat as me. Tonight, I just picked up the book Fatherless Generation, a new release by John Sowers, president of The Mentoring Project. I am looking forward to this read, since it is the first book on the topic I have read since I read To Own a Dragon by Donald Miller back in 2006. Donald Miller started The Mentoring Project to address the issue of boys who grow up without dads seeing as how it was part of his own story and part of thousands of boys' stories nationwide. John Sowers, who also grew up without a father, joined them a few years ago and is now president of The Mentoring Project.

I will be tweeting quotes from the book throughout my read. I'm not sure how long it is going to take to finish it. The book is short, but hundreds of other pages need to be read for school as well. It will get done sooner or later; my bet is sooner.

I've read the Foreword by Donald Miller and I'll end with a poignant quote, which I am glad he admits. He shares what's on my heart, what is true for me, but also what may be too shameful for me to admit myself: