Last night my roommate and I were chillin' in our living room having some conversation over cold beers. This is of course where the deepest of philosophies are developed. Here is a thought I had in our conversation:


How come the experiences that seem to affect us the most into our adulthood are the traumatic ones? I cannot even count anymore the number of times I've talked with people about how some crazy aspect of their past has ruined them throughout the course of their life and they are just trying to pick up the pieces. On the flip side, I have never heard someone say how a joyful experience has impacted their life so much that they have been living in light of that ever since.

Chime in. I'd love to hear what you think.

Email ThisBlogThis!Share to TwitterShare to FacebookShare to Pinterest
Labels: Reflections

That One Word Changed Everything

In my previous post I shared a funny story about my childhood. If you haven’t already read it, I invite you check it out before you continue. Laughing is fun and good and it is even better when I know you’re laughing at me. I wrote it because I wanted to share a humorous example of what my life has been like without a dad. The post below is another example, but has a different tone and purpose as you will see.

I’ll never forget the way she prayed.
Jamie had become my friend over the months we had been living in Italy with Campus Crusade. She and the other girls would come over to our place for a weekly meeting, which included studying how the Gospel transforms our lives and praying for one another. After prayer requests were shared among the group we would all bow our heads and spend some extended time going before God.
Jamie’s prayers stood out to me every time. The reason may not be what you expect. Jamie’s prayers were not excessively long nor particularly short. Her prayers were not filled with a string of memorized bible verses that all somehow related to our issues nor was she spewing out words that would have her kicked out of any Bible-believing church. Jamie was not prone to wailing on her knees in sadness nor would she wildly flail her arms in rejoicing before the Lord. So what was it about the way Jamie prayed that has deeply impacted me to this day? Simply this:
Jamie always started her prayers with “Father.”
You see, I grew up without a dad. I don’t mean that my father was physically present but emotionally absent. I mean that my dad was never in any real way a part of my life. He didn’t see my first steps. He didn’t hear the first words that came out of my mouth. He never saw me win the fourth grade spelling bee. He never came to cheer me on at my basketball games. He wasn’t there for my first date, my first breakup, my high school graduation, my college graduation. I never heard from his lips, “I’m proud of you son.”

In everything I’ve done I’ve been quite successful. I’ve won awards and accolades. I am complimented often and am continually told how great of an impact I can have in this world. I share this not to boast, but to confess I’ve spent much of my life striving for this success with the hope to hear those abyss-filling words from him – “I’m proud of you son” – from this ghost of a father.

Somehow the absence of my earthly father had caused me to keep myself at a distance with God. I never really thought about it until I heard Jamie’s prayers because they had the effect of a mirror exposing my own prayers. I had no problem praying to God, but that was just it; I would always pray to God as “God” or “Lord” or some other title that reflects his authority and his majesty, which, in a sense, reflected his distance from me. Now I am all for praying with reverence and these ways of going before Him are good. But deep down I knew that this was a distance I had kept because I did not know the intimacy of prayer. I didn’t know my adoption into God’s family as his son because of Jesus Christ, His True Son. It was foreign and scary.
But unbeknownst to Jamie, she was relentlessly persistent in showing me that I could pray to God as “Father.” As the months passed and the prayers mounted, I broke down. I began seeing in the New Testament the plethora of examples of Jesus and the apostles speak of God as Father, especially when Jesus told his disciples how to pray. It was everywhere! Prayer to God had always been there since I became a Christian, but intimacy with my Father began to take deeper roots thanks to Jamie’s example of prayer.
The Christian life is a funny thing because no matter how old you get, no matter how many birthdays you celebrate, no matter how successful you become, no matter the name you make for yourself, the key to joy is remembering you’re Abba’s child.
One of the best ways I’ve come to know this is through this simple word that plumbs profound realities of God. Have you ever examined how you pray? How do you typically start your prayers? Today, I ask that you join me in prayer, going before God with the words Jesus gave – “Our Father…”

I'm Not Going Inside 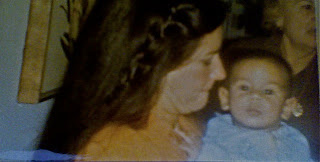 Growing up without a dad had its advantages…so I thought. My mom and I moved to New Jersey from New Mexico when I was just a few months old to live with my grandma. I grew up in a house full of women the first five years of my life. I was spoiled. I was the first grandchild, the first of a new generation. I would always draw attention to myself, whether in the silly ways of impersonating Michael Knight, or in the stubborn ways of refusing to take off my socks for days on end. When I messed up all I had to do was say something cute, play innocent or throw a tantrum and I would get my way whenever I wanted. Discipline was not something I knew as a young boy.

Fast forward. It’s the perfect day for every five-year old’s favorite time at El Dorado Elementary School: recess. The sky is cloudless, deep blue. The playground right outside our classroom is all dirt since there’s really only one patch of grass in all of New Mexico. As a five-year old the playground is as big as a football field and the monkey bars are a mile long. I am determined to get all the way across them without falling, just to prove to my fellow kindergartners I am already a man ready for the army.
Halfway across the bars, I hear the teacher calling us in. “It hasn’t already been 15 minutes!” I scream to myself. Everyone else, fooled by the teacher's obvious, vicious lie, quickly runs toward her, each going inside for the next activity. I know better. I have more time. I need more time.
Then it begins.
“Andrew, it’s time to go inside,” the teacher yells. I’m the only one left.
“I’m not going inside,” I exclaim with pride now down off the bars, standing face toward her, arms tense at my side.
“Andrew, it’s really time to go inside,” she replies, challenging my right to still play.
“No. I’m not going inside” I say, calling her bluff.
With her arms crossed, head fuming, she tells me one final time, “Andrew, if you don’t come inside now I’m sending you to the principal’s office.”
I’m not used to this. I always get my way. This was new. What could I do but listen? “I can’t lose this battle” I thought. What can I do? Who does she think she is?
To this day what I did next doesn’t make sense to me for any five-year old, but it happened and I can’t take it back. I have to tell it like it is.
I stand there, defiant like a pit-bull unwilling to release the clench I have on my prey, and proceed to take my faux-leather belt off my little boy jeans. I folded it, end and buckle in hand raised over my head. My eyes stare her down. She knows my threat. Still, I faintly hear the Western music in the background and imagine the tumbleweeds bounce between us. Then, as if filled with a thousands lions, I roar in assumed triumph, “I’M NOT GOING INSIDE!!!!!!!!!”
My teacher doesn’t know what to do. Honestly, I don’t remember what happened immediately after that. Maybe I blacked out due to the sheer ecstasy of victory . However, the next thing I remember, I’m sitting in Principal Garcia’s office. Two images are vivid: his thick moustache and his even thicker paddle.
That was the first time I was disciplined by a man.
By His Grace.
Posted by Unknown at 10:59 PM 6 comments:

What Do You Want Most in a Church?

My friend Edd Blott made this promo video for the recently released 9 Marks book by Jonathan Leeman,  Reverberation. Edd asked me to do the voice over for the video. It was quick and lots of fun. I love how the video turned out.

Did I miss my calling?


What do you most want in a church? from 9Marks on Vimeo.

Email ThisBlogThis!Share to TwitterShare to FacebookShare to Pinterest
Labels: For Fun, Videos

The night of the 3rd largest snowstorm in Chicago history. Boom.