The One Truth Deepak Chopra Has for the Whole World 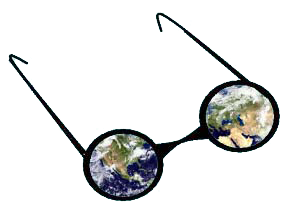 Today I watched a number of videos featuring Deepak Chopra. You might ask why I'm doing this? Well someone very close to me has asked me to check him out. I told her that I have a general idea of where he's coming from and what he believes, but before this week I honestly had only heard soundbites, second hand thoughts, and a short debate featuring him and Pastor Mark.

I began with the video she shared with me on one of his meditations regarding gratitude. It was a 2:42 minute clip and the comments below were just astounding. Regardless of what you believe about him and his teaching, the man has had an impact on thousands, if not millions, of lives. I plan on writing more in the future regarding this impact, but this post doesn't have anything to do with that.

After watching the video, I went to the sidebar to watch some more videos. There are some videos that related and of course there's always those "featured" videos that are outlandish and completely out of left field. The one that caught my eye the most was titled Richard Dawkins Exposes Charlatan Deepak Chopra. The reason I wanted to watch it was because these are two men who I know aren't Christians and wouldn't even come close to saying that they are. Yet, even in the commonality of not being Christians, they were at odds. I thought it would be a video that just featured Dawkins attacking Chopra's approach toward the world, so I was surprised when near the end there was a brief exchange between Dawkins and Chopra. They go back and forth, primarily on issues of objectivity, which is Dawkins' position and subjectivity, which is Chopra's position.

My curiosity was peaked. What next? This led me down the trail of a number of videos featuring these two men. I had not been aware that public disagreement and vitriol were waving back and forth between these two men. Instead of following the trail, I checked out Chopra's public apology to Dawkins. You can see it for yourself here.

First, I have to say I'm super impressed with Chopra's willingness to make this apology. As far as I can tell it is sincere and genuine. He seeks to be humble and while he may get into some unnecessary details and others may see it as a ploy for legal reasons, I thought it was a strong move by Chopra to make a public apology for public actions. Second, I can't believe this cat is 65 years old. Dude looks like he will be living another 65 years. Especially with those glasses. He's got some style.

Now, to what Chopra gets right. It is so crucial that all of us see this. It's the one essential truth that Chopra teaches that all of us can actually nod our heads in affirmation. If we miss it, then we miss one of the most important aspects to how we think, talk, interact, believe, and live in this world.

What is it? Deepak says it as clearly as anyone can as he speaks about the differences between him and Dawkins: "We represent two different worldviews." Again, in this blog I'm not going to get into what the worldviews are, though I plan sharing more about Deepak's later. But the key word we cannot miss is "worldviews." The big idea here is that Chopra, Dawkins, you, me, and everyone else in the world without exception has a worldview. This is the one absolutely essential truth on which I wholeheartedly I agree with Chopra and I trust you agree with him to0. Your worldview requires it of you. Boom.

So, what is a worldview? We get our term from the German, Weltanschauung, which literally means "worldview," but is intended to express a comprehensive conception or image of the universe and of humanity's relation to it. In other words, worldview is the set of glasses by which we see the world and try to explain everything around us. Deepak's got a set of stylish ones on right now. These glasses never come off, meaning we are constantly interpreting every little detail of everyday through them. It is all-encompassing and flows through every thought we have.

Here's another way of thinking about worldviews. Consider the Periodic Table. The Periodic Table in chemistry shows us the fundamental elements that make up all of what we know in material existence. There is nothing that exists materially that doesn't have something of those elements in it. They are the fundamental building blocks of everything else. So think of a worldview like the Periodic Table. The elements make up all aspects of your life - who you're going to marry, what kind of job you're going to take, how you're going to raise your children, where you will live, your views on God, your belief about love, equality, justice, and so on. Nothing goes untouched without those elements.

Here is where we get confused. So often we believe we're all functioning off the same Periodic Table, but just choose different elements by which to live. So we look at the element of "love" for example and think that we're working with the same one. But, in fact, we're not. When it comes to differing worldviews we are not working from the same Periodic Table, but two completely different ones. The elements that make up one worldview are not like the elements that make up another. That's why when we use the word "love" we have to figure out what each worldview actually means by it because as soon as that question is raised we see how different our definitions of the word actually are. It would be clear in just a few seconds that this is the case between Chopra and Dawkins. These two men don't copout and say, "we are just saying the same thing in different ways" or "why can't we just put this behind us." They can't even say "let's just love each other" because they would disagree on what that means.

So you and I have to understand first, that we have a worldview, whether or not we know it. Second, if we aren't aware of what our worldview is, we should come to know and be able to articulate what the elements are. This is super helpful when having conversations or getting into a debate and I do think we should be both conversing and debating our worldviews because there are massive implications.

The truth of having a worldview is the one thing I can absolutely agree with Deepak Chopra on, even if I think everything else is nonsense.