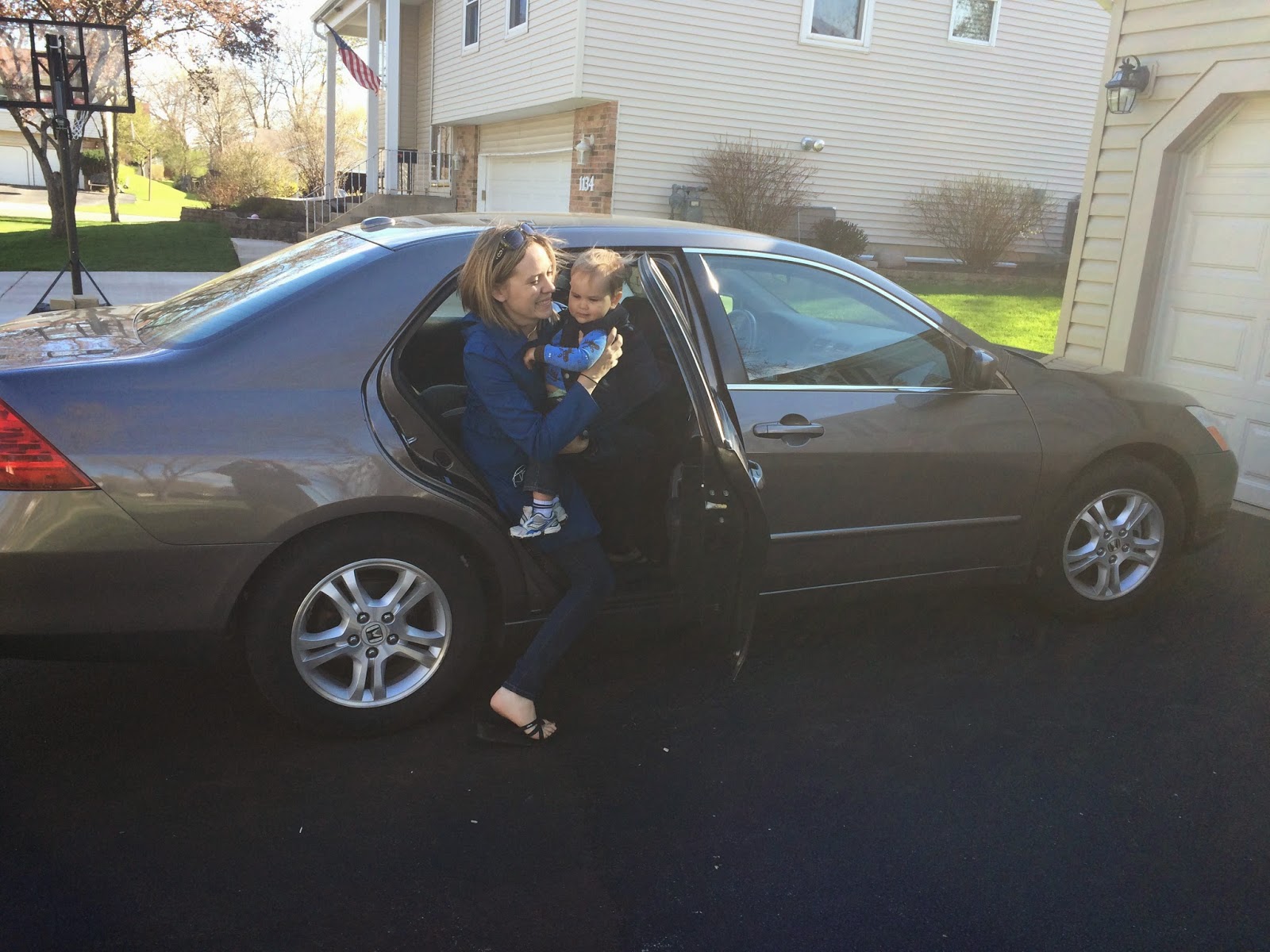 We bought our new car today!

I wrote just two days ago about how I had gone and looked a really great Honda Accord. It had a single owner, was in very good condition, and she kept immaculate records on everything done to the car, which was just basic maintenance because Honda.

So today, after lots of driving around, visiting two banks, hitting up a currency exchange, calling the insurance company, and leaving the old Civic at Stacy's parents, we are now the proud owners of a 2006 Honda Accord with FOUR FREAKIN' DOORS! We are also digging it because it's an EX-L, which comes with some other features our Civic doesn't have, like a moon roof, heated front seats, defrosters for the side mirrors, a 6-disc CD changer, and a sweet faux leather interior.

Of course we had to commemorate the moment Stace got to put Asher in his car seat without having to get all Cirque du Soleil like she used to in our old car. 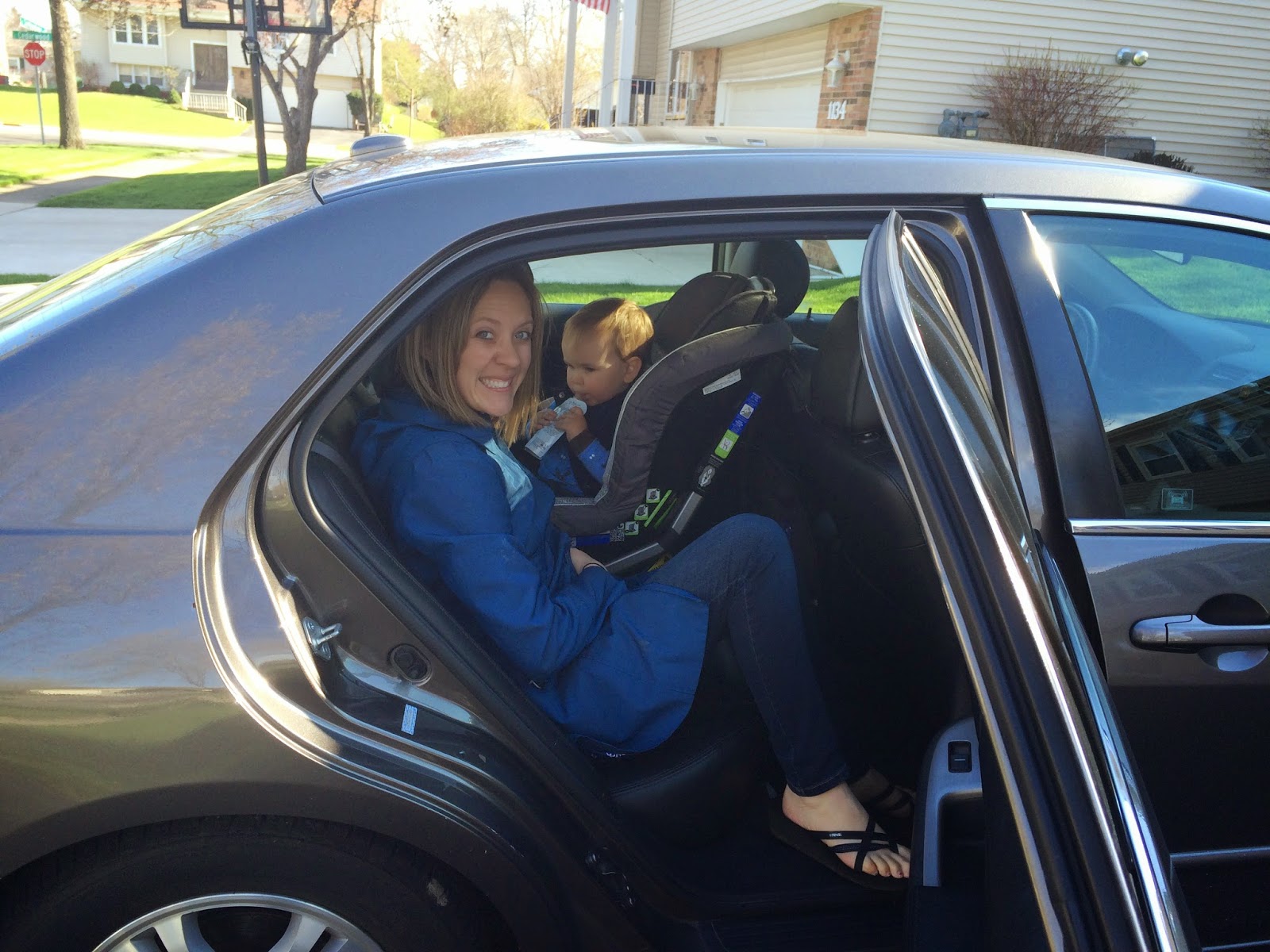 Now if you look closely, you'll see Asher being very content with his little pouch-o-liquid-fruits-and-veggies. He spent hours in the car today, so hooking him up with snacks on the rush hour car ride home was the least we could do for him. I should have just saved the half a box of Cheerios that I dumped from every crevasse of the seat when I transferred it over from the Civic to the Accord, but I guess he just had to settle for the pouch.

The ride was long on the way back and he cried a few times because the sun would penetrate his little blue eyes and make him feel as if the whole world disappeared. But he was placated with toys and his pouch, which he tossed to the side every now and then.

We finally found some street parking near our house (the car didn't come with a driveway unfortunately) and took a deep breath knowing it was all over. Right as we parked my mom called so I jumped on the phone while Stace went to get Asher out, using the NEW BACK DOOR OF OUR FOUR DOOR!

As I'm getting out of the car while talking to my mom, I hear Stace say something like, "Oh no!" Immediately I thought something was wrong with the car that I didn't notice when we bought it. I run around to the back and see her holding Asher and he's covered in what initially looks like poop. It was on his hands, his pants, and even his shoe. "This was an other-worldly poop," I thought. Then I look at his car seat and the whole butt region of the seat is also covered in this it. I ask Stace, "Is it poop?" and my mom's on the phone like "What???" Stace kindly assures me it's not poop, but it was close enough; it was that devilish pouch-o-poop that he squeezed All. Over. The Place. It wasn't just on him and on the seat, but all over the seatbelts and our beautiful faux leather and probably some innocent car that passed by us on the way home.

Mind you, Asher has had a lot of food with him in the back seat of the Civic and not once has that ever happened. But, because life, Asher decided this would be a good time to test it as a paint gun instead of grubbin' like he normally does. I'm thinking it was the fact that this pouch as a sweet potato/carrot/oatmeal concoction, revealing that this was not even close to Asher's fault, but an utter #parentfail from the start.

I was too crushed to take a picture of it, so I'll leave you (and me) with the memory of the joy we had when we first got in.

Nevertheless, it's a lesson that no matter how much we may get pumped about new shiny stuff or in our case a used, semi-shiny, car, we can't hold on too tightly to any of it because alls it takes is one 17 month old with a sweet potato shotgun pouch to remind you just how quickly it can all crumble.